Jenn, Ryan, and Kendyl discuss the best season yet of Game of Thrones!

Question of the Week: What are your predictions for next season? What’s John’s real name? How is Cersei going to fuck up next? Where will Dany land? Where is Arya headed?

Check out our episodes on Season 3, Season 4 and Season 5.

END_OF_DOCUMENT_TOKEN_TO_BE_REPLACED

In which Kendyl  lists those characters that are really enjoyable to watch and really satisfying to hate.

In which Jenn thanks several authors for their literary input–and impact–to the world!

Adaptation talks Game of Thrones season 5, going over all the major storylines—cheering for some, groaning for others—and making predictions for next season!

NOTE: We do not spoil anything past where the show is, but we do talk about things that happened differently in the books, so there are some minor book spoilers.

Check out our episode on the novel A Dance with Dragons!

END_OF_DOCUMENT_TOKEN_TO_BE_REPLACED 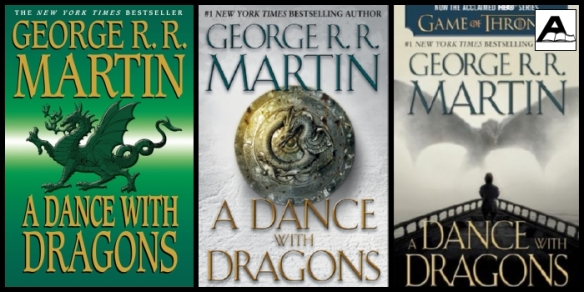 Just in time for the start of season 5, Kendyl and Ryan hash out the events in A Dance with Dragons and what theories they have as well as what they expect from this season of Game of Thrones. They aren’t always in agreement, so make sure you break the ties by commenting below (or on our social media pages)!

For a similar discussions, check out our episodes on A Feast for Crows, Game of Thrones season 4,

Once Upon a Time season 3, and Sherlock season 3.

END_OF_DOCUMENT_TOKEN_TO_BE_REPLACED

The Adaptation staff have spent their February with these lovely characters. How about you?

The World of Ice & Fire by George RR Martin

I’ve heard a lot of people say that there isn’t a lot of information in The World of Ice & Fire that you can’t get from the books, but despite the fact that there is a lot that we already knew, the book was worth buying for the extra information you do get, the excellent art work and the ability to have all the bits and pieces of this complex world all in one place. You could definitely just use it as a reference guide, but I sat down and read it cover to cover, not putting it down for days.

The Librarians, season 2 starting later this year on TNT

The Librarians started out as a series of TV movies, 10 years ago on TNT, about a “professional student” Flynn (played by Noah Wyle), who is hired as a librarian. The library is full of magical artifacts much too dangerous to be out in the world, and the librarian (there is only one) is the only person who can seek out and secure them. Since then they have made novelizations, comic books, and most recently a TV series that changes the game.

In the new series, the librarian (still Noah Wyle) finds that other librarian candidates who were not hired, are being hunted. He and his Guardian, Eve (played by Rebecca Romijn) go round up a three of the last candidates, played by Christian Kane, Lindy Booth, and John Kim. In the process the library is infiltrated and lost which sets the series off where Flynn decides to change the rules and have more librarians to fight the small magical disruptions, while he himself finds a way to recover the library. He leaves the new librarians in Eve’s capable hands and with the Library Annex and its caretaker, Jenkins (played by John Laroquette) only to appear when real danger is near. The whole franchise is a wonderful roller coaster ride.

I’ve recently been rewatching Roswell, which is the epitome of 90s teen supernatural romantic dramas. The story focuses on a group of teens in Roswell, New Mexico a touristy town that plays on the 1947 UFO “crash” by having alien themed restaurants and a UFO museum. The series kicks off with a shooting in the local Crashdown Cafe that almost kills Liz  Parker, until she is saved by secret teenage alien Max Evans. Yes, it’s cheesy as hell and tons of fun to watch. In fact, we’ve even created a drinking game.

1) Drink every time someone moodily (read: creepily) looks at someone else through a window.

3) Drink every time an alien and a human have to talk about how they can’t be together because they are just. too. different.

So you over-21s, drink up! And you under 21s? Just get some friends together and have a blast watching, laughing and eventually getting way too emotionally involved with these characters. By season 2, you’ll be crying when they cry.

That’s it for us this month, but be sure to leave your own recommendations in the comments!

The Adaptation staff have started the new year off right with these recommendations for January! What have you been into this month?

I have been reading through Void, which is a compilation of three novels published in the 90s. The first one is called Hex, and I’ve just finished that one. The basic premise is about a dystopia future where certain people – called Hexes – are being rounded up and exterminated because they have special abilities to control technology. It’s almost a psychic connection with the World Wide Web. Anyway, one of these is a particularly gifted Hex named Raven, and she and her brother are on a search for their younger sister, who was separated from them years ago and who may or may not have just come on the government’s radar as being a Hex herself.

I have to recommend Agent Carter! I didn’t really get into Agents of S.H.E.I.L.D. sadly, but I knew I would love this. It’s fab, so good. She’s a fabulous powerful woman who uses the sexist norm of the 40’s against all the men. I love it. And, and, AND! Holy crap Chad Michael Murray! I did not recognize him for so long, they styled him so well, and he is suited to this part so well. So many good people in this show and I was hooked by first episode.

I’m reading Octavia Buterly’s Fledgling, it’s a novel about Shori genetically altered part human (African American) vampire. An attack on her human/vampire compound leaves her badly injured, without her memory and the only survivor. I read a portion of this I college and now I started from the beginning again, but this book lives in grey areas so I’m having mixed feels.

The Princess and the Queen by George R. R. Martin

A short story from the A Song of Ice and Fire universe, this story is part of an anthology called Dangerous Woman edited by George R. R. Martin. When King Viserys dies, he leaves a daughter, Princess Rhaenyra, from his first marriage and a son, Price Aegon from his second. The queen wishes her son to take the throne, but as his first born Princess Rhaenyra feels it is her birth right, resulting in a civil war between the Targaryens that results in the supposed extinction of the dragons. The story has great background information for Targaryen fans and is pretty fast-paced for Martin’s normal writing style.

Being a rather busy bee, I’ve been watching a lot of shows that I don’t have to focus all my attention on. Unfortunately, although I don’t have to watch every second of Cutthroat Kitchen, I always end up wanting to anyway. Hosted by Alton Brown, four chefs are eliminated in three rounds, each with its own theme, like they all have to make chili or muffins or sausage. They each start with $25,000 and every round several things are auctioned off to them that will either make it easier for the winner or harder for their opponents. For example, they can take away the privilege of using a muffin pan or be the only one allowed to use a sausage stuffer. It’s pretty entertaining to watch the chefs screw each other over and really interesting to see how they get around the obstacles.

That’s it for us this month, but be sure to leave your own recommendations in the comments!

In which Jessica tells you our picks for the best friendships in books and on screen.

In our first book-only Game of Thrones discussion, the hosts cover A Feast for Crows by George RR Martin in order to prep themselves for season 5. They take (too much?) pleasure in the downfall of some, hope against hope that some are still living and make predictions for the future of the series and the television show.

Check out our other GoT episodes #81: A Game of Secret Targaryens and #92 It’s Anyone’s Game of Thrones

For a similar discussions, check out our episodes on Guardians of the Galaxy, Once Upon a Time season 3, X-Men: Days of Future Past, and Sherlock season 3.

END_OF_DOCUMENT_TOKEN_TO_BE_REPLACED 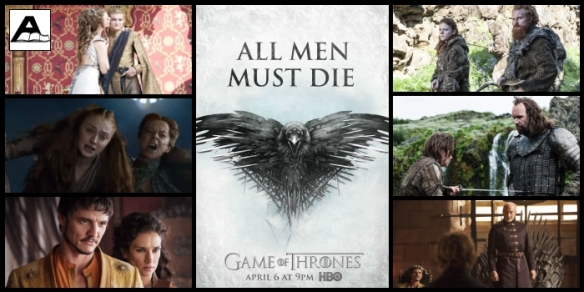 Regicide, patricide and uxoricide: Game of Thrones season 4 was full of artful deaths and shocking moments, but was lacking in lingering questions. While this season felt more like setting up a chess board than a murder mystery, the hosts are still excited to see where everyone ends up and what their roles will be next season!

For a similar discussions, check out our episodes on Game of Thrones seasons 1-3, Once Upon a Time season 3, X-Men: Days of Future Past, and Sherlock season 3.

END_OF_DOCUMENT_TOKEN_TO_BE_REPLACED

Just in time for the start of season 4, the team gets all their thoughts out on season 1-3 of Game of Thrones while comparing it to the series by George R.R. Martin. Loads of character discussion ensues as well as talk of who everyone wants on the throne versus who might actually get there. The hosts that are farther along in their reading bite their tongues to keep from spoiling while the newbie readers habitually add ‘at this point’ to everything they say just in case.

What are your season 4 predictions? Leave them in the comments, but no spoilers!

EDITOR’S NOTE/SPOILER WARNING: Though Ryan and Sarah didn’t fully succeed in not dropping hints about what happens past where the TV show has reached, speaking as a person that has only read up to the end of book 2, I did not feel spoiled by anything they said. They mention the names of some events but don’t say what happens, and say one thing about Arya’s future path that is not surprising. We also threw in some fake spoilers and fan theories along the way, so basically just don’t trust anything you hear.

For a similar discussions, check out our episodes on An Unexpected Journey, The Desolation of Smaug, Thor: The Dark World and Percy Jackson.

END_OF_DOCUMENT_TOKEN_TO_BE_REPLACED

In which we set a record for list length and tell you about the nine screen adaptations that had awesome scripts.

#22: Because… High School (The Perks of Being a Wallflower)

#34: The Merry Old Land of Manipulation (The Wizard of Oz)

In which our Adaptation hosts list the plot twists that threw us for a loop in the films versus the original.

In which our Adaptation hosts reveal that we are not mindless robots, blindly following the whims of Hollywood in our reading preferences…at least, not entirely.

Game of Thrones. . . I consider myself something of a fan: willing to struggle every week against my slow internet connection and resulting low quality video to get my fix, and the mere mention of a favorite character or scene sends me into a flurry of joyous aspirations and recollective ramblings. Alas, despite my enthusiasm, I am so far naught but a TV-version junkie.

I am one of those fans which George R.R. Martin describes in his interview with HBO that loves the show, but considers lifting even one of the currently five existing books a daunting ordeal. I am sure they are wonderful and I do love a good read, but Mr. Martin himself admits that ‘prose and film have different techniques and weapons that they use.’