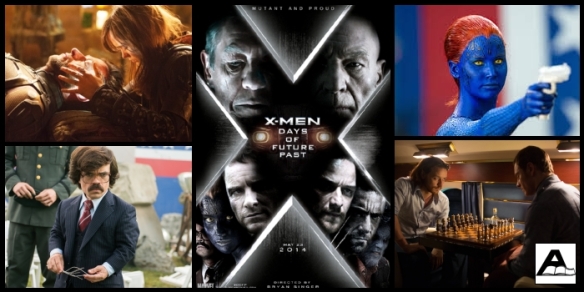 … but then they didn’t. In the new installment in the X-Men series, Sentinels created by Trask Industries have decimated mankind. In order to prevent this future, Wolverine travels back to the 70s to stop the event that set these events in motion. Our hosts come together to try to figure out the intricacies of this new time-line, what it means for the future and how thankful they are for the fixed mistakes.

For a other superhero discussions, check out our episodes on The Amazing Spider-Man 2,  Captain America: The Winter Soldier, Thor: The Dark World, The Wolverine, and Man of Steel

Opening music: Hope (Xavier’s Theme) from the X-Men: Days of Future Past score

Closing music: The Future/Main Titles from the X-Men Days of Future Past score

-Based on All You Need os Kill by Hiroshi Sakurazaka

Orange is the New Black Season 2

-Based on Orange Is the New Black: My Year in a Women’s Prison by Piper Kerman

X-Men: Days of Future Past

-Based on the Marvel comic storyline and characters

-The Wolverine end credits scene… did it really lead into this? (Trask Ind)

-Kitty can send ppl back in time? (she’s the one that goes back in comics)

-Wolverine sounding crazy… like he doesn’t know he sounds crazy?

-lots of motivational speeches; where did that come from Logan?

-everyone dies at least once

-can Eric please stop fucking everything up?

Next episode: #90 on the film Maleficent

Previous episode: #88 on Once Upon a Time Season Three

1 thought on “Adaptation #89: X-Men and the Day Everyone Died”