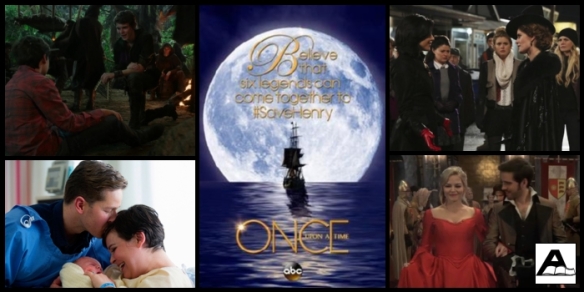 In this episode of Adaptation, the hosts have a magical time discussing Once Upon a Time season three and three and a half. From the manipulative genius that was Peter Pan to the bratty child that was Zelena, this season was full of irredeemable villains, hardcore shipping and more twisted limbs on the family tree.

Music: Hope Will Return by Mark Isham from the Once Upon a Time score

The Fault in Our Stars

-Based on the novel by John Green, covered on episode #85

Once Upon A Time Season 3

Part 1: Neverland
-in part one everyone said they were most excited for Peter Pan. Did it live up to expectations?
-Tinkerbell
-Emma’s relationship with her parents (Lost Girl)
-Killian becomes a pirate
-Ariel/Ursula
-Wendy
-Henry and Emma leave for New York

Part 2: Zelena
-Hook brings back Emma’s memories, gives up ship
-Zelena and Regina are sisters
-Neal brings back Rumple, sacrifices himself, sends note to Hook
-Rumple trains Zelena, she turns green from envy
-Captain Swan, Outlaw Queen
-Cora’s past: What exactly about the past did Zelena want to change?
-Hook’s cursed lips
-Regina can use light magic!

Part 2.5: Time Travel
-Hook and Emma go back in time and rearrange things
-Rumple helps so he can see Bae again
-Ending with Elsa
-predictions for season 4?

Captain-rockylin-swan on tumblr:
(Beware of crappy english written on a phone)
Best season for me with no doubt! I love that they split the seasons, and I love both the Neverland and OZ storylines. And I will actually miss Peter Pan and Zelena, they were both great villains for the show. And for the first time since the start of the show, this season ouat became a obsession for me for real, and one of my favorite shows. I have loved the show from the start, but for me they steped up this season. And finally Emma have done some great progression in her character arc, and they did find a great love interest in Killian, that balance each other nicely.
I am also happy that the finale were so happy. I truly needed that! And as viewers, we need to get that kind of happy moments from time to time to give us time to breah and relax, and specially from a season finale. The overall trend lately from shows seem to fill us with as much pain, angst, agony and despair from a shocking gutwrenching twist that leaves us in despair and with a empty place in our heart. And thankfully, Ouat dared to move away from that, and therefore, this season feels truly completed and at least for me satisfying. But of course, also with enough teasing that makes us want that next season right away. And for once, its a good feeling.
What I do hope to get more of next season are the other characters that have been missing, like Red, Mulan and dr. Whale and so on, we need that variation of recurring characters again.

Next episode: #89 on the film X-Men: Days of Future Past

Previous episode: #87 on the film Legends of Oz: Dorothy’s Return and the book Dorothy of Oz