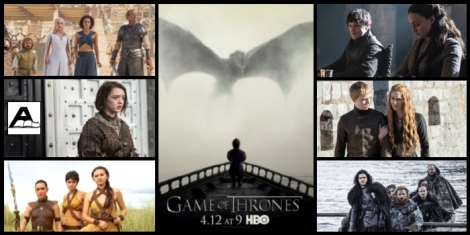 Adaptation talks Game of Thrones season 5, going over all the major storylines—cheering for some, groaning for others—and making predictions for next season!

NOTE: We do not spoil anything past where the show is, but we do talk about things that happened differently in the books, so there are some minor book spoilers.

Check out our episode on the novel A Dance with Dragons!

For a other TV show discussions, check out our episodes on Arrow and The Flash, Once Upon a Time, Agents of SHIELD and Agent Carter.

-Based on the Terminator franchise

-Based on the trilogy by Guillermo del Toro and Chuck Hogan

-Loras and Margaery thrown in jail

-Cersei in jail and walk of shame

-Oberyn would not have wanted Marsella hurt

-Was opening the fighting pits the right decision?

-kills the former slave for killing the Harpy

-What do you think of Hizdahr?

-gets into Dany’s service

-gets rid of belongings, except Needle

-What do you think of Manse’s decision to burn rather than kneel? (“The freedom to make my own mistakes was all I ever wanted.”)

-Manse is still alive in the book

-Jon is offered Winterfell, and I dissolve in a puddle of tears- gets elected Lord Commander- beheads Janos

-burns his daughter, wife commits suicide and is abandoned by his men and Melisandre

-finds out about Bran and Rickon

-escapes to go where?

No Bran this season

maybe he’ll return with a better wig next season

2 responses to “Adaptation #130: A Losing Game of Thrones”