In this episode, Adaptation discusses Let It Snow (2019) with hosts that have and hosts that have not read the John Green, Maureen Johnson, and Lauren Myracle novel it’s based on.

END_OF_DOCUMENT_TOKEN_TO_BE_REPLACED

In covering the Hulu series Looking for Alaska (2019), the Adaptation hosts consider the target audience, who sees Alaska as she is, and the changes the show made to the friendship dynamics from the John Green novel.

END_OF_DOCUMENT_TOKEN_TO_BE_REPLACED

Jenn, Jess, and Kendyl dive into the third John Green novel that we’ve covered on Adaptation, Looking for Alaska. The group talks through the friendships, the pranks, and seeing others fully.

END_OF_DOCUMENT_TOKEN_TO_BE_REPLACED 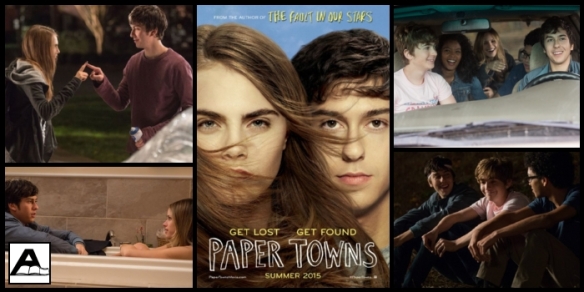 Our hosts think that the Paper Towns film was a fun adaptation of the John Green novel, much lighter than the book and with a few unresolved plotlines. They’ve also decided that no one is good enough for Lacey and we really need to find a story that properly deconstructs the Manic Pixie Dream Girl, preferably from her perspective.

Check out our episode on the novel here!

END_OF_DOCUMENT_TOKEN_TO_BE_REPLACED

Nicole and Jess talk Paper Towns by John Green, giving Margo more than her share of character analysis and comparing the treatment of this Manic Pixie to that of Green’s Alaska and how (un)satisfying they found the ending.

Check out our episode on the film here!

END_OF_DOCUMENT_TOKEN_TO_BE_REPLACED 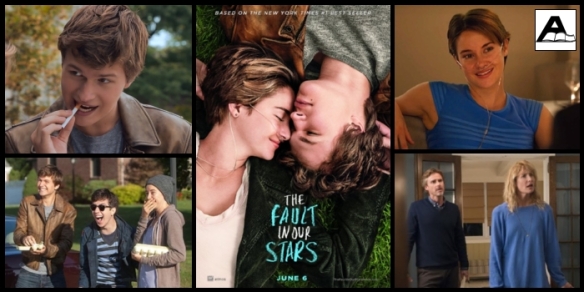 After covering The Fault in Our Stars novel by John Green in a previous episode, the hosts return to talk about the new film adaptation of this teenage life story. They agree that the film was extremely accurate, but still missed a few of their favorite moments and worry that some themes were lost.

What did you think? Let us know in the comments!

For a other similar discussions, check out our episodes on Maleficent, Once Upon a Time season 3, Divergent, The Book Thief, Starkid’s Twisted, and Catching Fire

Also check out our vlog where we dream cast Will Grayson, Will Grayson by John Green and David Levithan

END_OF_DOCUMENT_TOKEN_TO_BE_REPLACED

In which Kendyl gives her ideal cast for the much hoped for film adaptation of Will Grayson, Will Grayson by John Green and David Levithan.

She also wrote a review of the book for the River Ram Press blog, which you can read here. 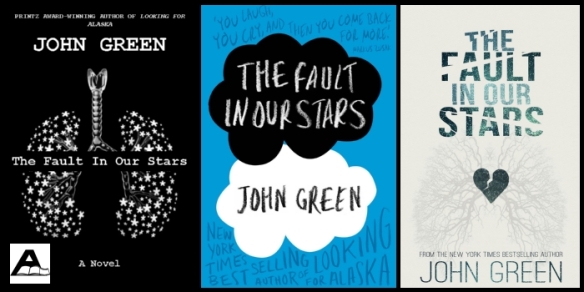 In this episode our hosts focus on The Fault in Our Stars by John Green which follows a teenage girl with cancer as she falls in love for the first time. The hosts discuss the different ways that Hazel and Gus approach life, their parents and the criticisms about their intelligence and pretension.

For a similar discussions, check out our episodes on Divergent, The Book Thief, Starkid’s Twisted, and Catching Fire

END_OF_DOCUMENT_TOKEN_TO_BE_REPLACED

I have a new obsession and her name is Yulin Kuang.

That sounds creepy, but if there’s one thing I think I can trust internet fandom with, I hope it’s understanding that stage where you have just discovered a new creator and then must proceed to watch everything they have ever created. This has recently happened to me when I came across Shipwrecked‘s series Kissing in the Rain.

Kissing in the Rain is a transmedia YouTube project of the Shipwrecked team that includes Yulin Kuang, Sinead Persaud and Sean Persaud. It’s first chapter has just concluded and chapter two is due to begin May 5. Chapter one followed actors James and Lily, played by Mary Kate Wiles and Sean Persaud, as they are frequently cast as romantic leads in films that have them kissing in the rain. Each episode starts with the movie scene leading up to the kiss and then the director yells cut and the couple reverts to the actors awkwardly trying to fill the post-kiss silence.

The transmedia bit comes in with the encouragement and canonization of fan fiction. With each episode Yulin Kuang releases a companion drabble to add to the story of the two actors and then fans follow her lead. After going through the related tumblr tags and reading what the fans come up with, Yulin decides what to canonize and it gets reblogged on the official Shipwrecked tumblr and is official canon from that point forward.

If you’re interested in starting to watch, there is a very helpful post that pulls everything together here. There’s just a week until chapter two starts which will be following a different set of actors, Audrey and Henry, played by Sinead Persaud and Sairus Graham.

But at the risk of sounding like an infomercial, that’s not all! After I got caught up on Kissing in the Rain, I needed more, so I moved on to a previous Shipwrecked series called A Tell Tale Vlog where Sean Persaud takes on the role of Edgar Allan Poe as he vlogs, writes poetry of questionable quality and gets haunted by Lady Lenore played by Sinead Persaud. EA Poe tends to bring to mind thoughts of a rather somber nature and Shipwrecked expertly takes advantage of that, turning somber into hilariously awkward. There’s even something of a crossover in the last episode with Kissing in the Rain episode 4, which just happens to be my favorite.

And if you thought that I stopped there, you haven’t been paying attention. After finishing A Tell Tale Vlog, I moved on to Yulin Kuang’s personal YouTube page where she has a series called I Didn’t Write This and various other original projects, including a trailer for an upcoming short film called Irene Lee, Girl Detective. But since this is a blog that focuses on adaptations, I think I should at least try to pretend that is what I’m doing.

In I Didn’t Write This, Yulin creates visual representations for poetry such as T.S. Eliot’s The Love Song of J. Alfred Prufrock and excerpts from novels like John Green’s Looking For Alaska. A personal favorite of mine is her adaptation of Shakespeare’s Sonnet 116 and among the few videos that I haven’t watched yet is an excerpt from Rainbow Rowell’s Fangirl as I fear the potential spoilers. Even if poetry isn’t your thing, I seriously suggest watching and continuing to follow this series. Yulin’s videos are gorgeously created and will make you feel things, just like the rest of her work.

Finally, Shipwrecked used their week off from Kissing in the Rain to release their newest project- a music video featuring Mrs. Rochester from Jane Eyre as she sings a parody if “When Will My Life Begin” from Tangled. Titled Bertha’s Attic Song, Sinead Persaud plays Rochester’s neglected wife as she toes the line between her distress, her insanity and her obsession with fire. They even work in a little crossover at the end with Alysson Hall of The Autobiography of Jane Eyre web-series.

If you’d made it this far, I do hope that something on this list of creations has caught your eye enough for you to delve into the world of Yulin Kuang and Shipwrecked. Everything that I’ve seen so far has been impeccably executed with an obvious passion for film making and that sense of fun which keeps you wanting to see more.

Let us know in the comments if you’ve already been following one or all of these projects or if something in particular caught your eye. You can also talk to us on Twitter @AdaptationCast and Tumblr.

Back in September when we made our Adaptations We Wish Existed vlog, I smugly suggested that my pick, Will Grayson, Will Grayson by John Green and David Levithan was the most likely to happen given all the recent press on The Fault in Our Stars adaptation. Well, I got the author right, just not the book.

Earlier this week, Deadline announced that the team behind the TFIOS movie will be joining up again to bring John Green’s Paper Towns to the screen. Scott Neustadter and Michael H. Weber will once again take on the challenge of writing the screenplay while Marty Bowen and Wyck Godfrey will reprise their roles as producers. This time, however, John Green himself will be getting a executive producer credit. In addition, Nat Wolff who plays Isaac in TFIOS will be stepping into the center of Paper Towns as the main character, Quentin.

While it might seem presumptuous to sign the team up for another project when the TFIOS film is still two months away from release, Green comes complete with a built in audience that leaves no doubt of the film’s success, at least in the number of fans that will run out to see it opening weekend. How well they like it will be another story, but if the author’s reaction is anything to go by, it will be amazing.

Following the announcement of the Paper Towns film, Green wrote about his experience with TFIOS and his confidence in the team:

The experience of making The Fault in Our Stars was really wonderful because of the people involved: They all brought their talent and professionalism to the story and I’m so proud of the movie they made.

It was all so fun and magical (and frankly so different from my previous Hollywood experiences) that to be honest I wasn’t particularly keen to make another movie—unless I could work again with people I really trust.

And now it has happened!

I’ve already admitted that Paper Towns wasn’t my first choice for a second John Green novel adaptation, but that doesn’t make me any less excited about the announcement. Especially since the writing team was also behind (500) Days of Summer, a film that attempts to dismantle the manic-pixie-dream-girl trope just as Paper Towns does.

Still, I’m not giving up hope that one day I’ll get to see Tiny Cooper on the big screen.

What John Green novel would you most like to see on film? Tell us why in the comments!

What better way to start out 2014 than by listing the adapted films that we are most looking forward to seeing on the big screen? And believe you me, there were a lot to choose from!

Honorable Mentions:
The Legend of Hercules
X-Men: Days of Future Past
The LEGO Movie
How to Train Your Dragon 2
Jersey Boys
Dawn of the Planet of the Apes
The Hobbit Part 3
Into the Woods

In which our Adaptation host Jessica nearly has a breakdown over one of John Green’s tearjerkers, and the other hosts read a smorgasbord of genres, from dystopias to magical realism to classic lit.

Our first vlog in which our Adaptation hosts present our top choices for books that we would love to see in movie-form. We think the big screen is ready for Jack the Ripper ghosts, cryogenic time travel, and Sith backstory. If some smart movie-maker bigshot happens to listen to the wisdom imparted here, take heed!

Looking for Alaska by John Green