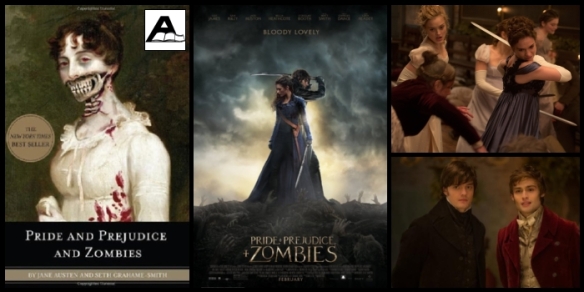 Jenn, Sarah, and Kendyl discuss Pride and Prejudice and Zombies the film, the movie and the original Jane Austen novel they are descended from in this entertaining episode. They could have done without the B plot the film added, but Darcy’s leather coat, Bingley being useless, and the badass Bennet quintet more than make up for it.

For similar discussions, check out our episodes on The Lizzie Bennet Diaries, Emma, World War Z, and Warm Bodies.

-Based on The Taliban Shuffle: Strange Days in Afghanistan and Pakistan by Kim Barker

Pride and Prejudice and Zombies

-a parody mashup of Jane Austen’s novel and zombie fiction

Pride and Prejudice and Zombies (2016)

-written and directed by Burr Steers

1 thought on “Episode #151: A Flirty Pissing Contest and Zombies”