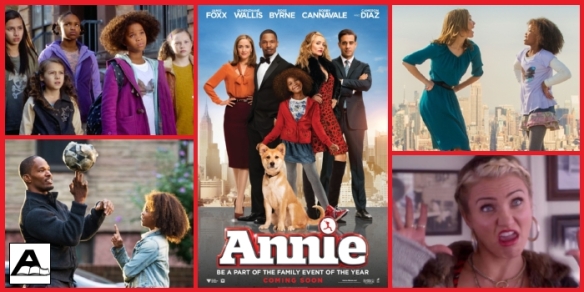 After rolling their eyes through the 1982 Annie, the hosts are pleasantly surprised with the 2014 version. The plot changes, the updated music, and better character development led to an incredibly fun film experience.

*NOTE* We tried a few things with the audio this time, trying to make it a bit louder for you commuters out there. Let us know if this is better, worse or the same!

For a similar discussions, check out our episodes on Big Hero 6, Alexander and the Very Bad Day, The Boxtrolls and The Giver.

The Woman in Black: Angel of Death

–Sequel to 2012 film, Based on The Woman in Black by Susan Hill

-Based on the novel by Thomas Pynchon

-Based on Chris Kyle’s autobiography

-Written by Will Gluck and Aline Brosh McKenna

-Directed by Will Gluck

-There have been two previous films, one in 1982 which we did a commentary episode on a couple weeks ago, and also a 1999 tv film

Previous episode: The Hobbit: Battle of the Five Armies