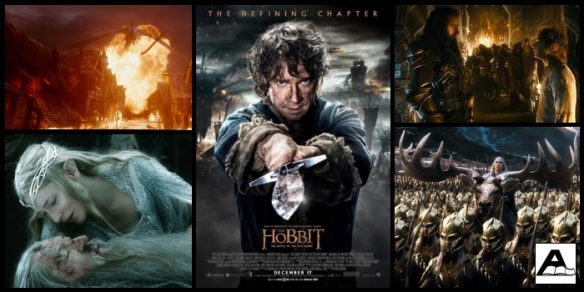 In discussing the final installment of The Hobbit, the hosts get into a heated debate about where the film starts, but agree on many of the other aspects like the fantastic fight choreography and the over-done love story. Make sure you let us know what you thought of the film, the end of the series and our discussion in the comments!

*NOTE* This episode is unusually quiet because of some problems with the recording. We promise to do better next time.

For a similar discussions, check out our episodes on A Feast for Crows, The Maze Runner, X-Men: Days of Future Past, and Emma Approved.

-Based on the character created by Michael Bond

-Based on the novel by Laura Hillenbrand

-Based on the stage musical and Grimm fairy tales

Andrew C. Taylor on Facebook: “Best of the three Hobbit movies. Moved along at a fast pace, no dwarfy shenanigans. Armies were a tad confusing. Who made up the Billy Connolly army? Liked it but am glad it’s over. Happy Christmas to you all at Adaptation. 🙂 ”

The Hobbit: Battle of the Five Armies

-Based on the novel by JRR Tolkien