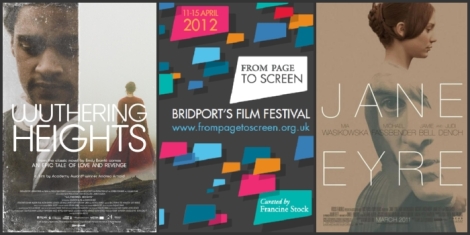 Finally the second part of the interviews that Kendyl did at the 2012 From Page To Screen festival are out! Olivia Hetreed talks about her work on Wuthering Heights (2011), an adaptation of the Emily Bronte novel and distilling the screenplay down to the very basic relationship in the story. Moira Buffini, screenwriter for Jane Eyre (2011) talks about the baggage that comes with the original Charlotte Bronte novel and the hosts discuss its feminist implications… and the dislike the Bronte’s had for Jane Austen.

Check out Adaptation Mini #1 for interviews with Corinna Wagner and Simon Beaufoy!

A special thanks to everyone at From Page to Screen for making these interviews possible!

Interviews done at Bridport’s 2012 From Page to Screen festival, April 11-15

Picture in the header image are From Page to Screen festival brochure.

-Based on the novel by Emily Bronte, published in 1847

-Based on the novel by Charlotte Bronte, published in 1847

Check out episode #8 for an interview with the From Page to Screen committee and mini #1 for interviews with Corinna Wagner and Simon Beaufoy (Salmon Fishing in the Yemen, THG: Catching Fire).

For more classic literature adaptations, check out our episodes on The Lizzie Bennet Diaries, Les Miserables, The Hobbit (novel and film),  and Anna Karenina (novel and film)!

One response to “Adaptation Mini #2: From Page To Screen Interviews – A Bronte Double Feature”