Well, my fellow Truebies, the end has finally come. The last episode of True Blood EVER aired Sunday night. If you have not had a chance to see it, I recommend that you go and watch it RIGHT NOW! This article is going to contain spoilers galore!

I don’t know about you, but I approached this ending with a bit of trepidation and also hoped that they would not end the series in a horrible cliché. Like most Truebies, I was horribly disappointed. 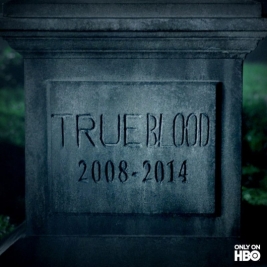 Unfortunately, I have not read the books that go along with this series, but from what I’ve heard, they don’t really follow them that closely anyway. When I found this series shortly after it started airing in 2008, I was a freshman in college and I was hooked instantly. I remember Anna Paquin when she was a kid in the movie Fly Away Home, leading a bunch of geese south for the winter so to say this was a massive departure from the image I had of her is an understatement, though not an unwelcome one.

As the series progressed and it slowly introduced a world with supernatural creatures coming out of the woodwork, the characters became more like friends than just people on a screen. I was became really invested in their happiness and I cried like a baby when some great characters had to be sacrificed on the altar of ratings (I miss you Jesus!). However, I understood why it had to happen.

This season however, I was less than impressed with the way they tried to wrap up the series. First off, they killed Tara! If they really wanted to kill her, they should have just left her dead at the end of season 4 when she got a shotgun to the head. That death at least had some meaning, dying to save her best friend! After all, no one has given a crap about Lettie Mae since the end of season 2, so why did Tara need to die to reconcile with a mother that was barely a side character? I just don’t understand it.

Then, they went on to kill Alcide! Yes, I understand the why of it, but that doesn’t mean I like it! In order for Sookie to really work through her jumbled feelings about the men in her life (a.k.a. Bill), Alcide needed to be out of the picture. And what better way to go than trying to protect the woman he truly loved, right? It would have made us really hate Sookie if she broke that beautiful man’s heart, but it was still a shame he had to die.

After that, the series just seemed to spiral even more out of whack when Bill got sick and Jason cheated on the creepy vampire chick who went Dark Age’s psycho. It was basically trying to push all the characters toward a happy ending by getting rid of characters that were hindering that process. That just speaks to uncreative writing, if you ask me.

In that endeavor, Jess’s boyfriend screwed Lafayette (probably my favorite character!), Hoyt came back into town with a beautiful blonde in tow for Jason’s interest, and Jess ends up right back where she started when she first became a vampire. Come on! True Blood has always tried to be blatantly real. Well, as real as you can be when you’re a series about the super natural. It was never the cookie cutter, all smiles and sunshine, happy ending kind of show. It had real endings. It showed that life, or the afterlife, is never perfect. Things don’t always go the way you want and life/death does not always turn out the way you expected. And they completely flipped the switch on this last episode. RIDICULOUS!

Jess married Hoyt, Jason got Hoyt’s hot, child-loving girl-you-can-settle-down-with and a family, Lafayette got James, Sheriff Belfluer got Holly, Arlene ends up with a hot vampire, Erik and Pam get rich off of “New Blood” and Sookie ends up married, pregnant and hosting giant Thanksgivings.

To be fair to Sookie, she did have to kill the first man she ever loved, but even that was anti-climactic. That scene left me feeling, for lack of a better word, cold. Sookie couldn’t sacrifice her Fairy Light to kill Bill and Bill refused to live so that she could have the life he wanted for her. It was cliché and awful. The sad dying hero sacrifices himself for the beautiful heroine so she can live and be happy. I hate that this show wrapped everything up in a pretty little bow. I have been a loyal fan for years and this is so disappointing.

This might not be a normal response considering when a series doesn’t give you a nicely wrapped up ending people are furious. In this case though, I think a little ambiguity would have been nice. I would compare this ending to the epilogue in the final Harry Potter book. Sometimes it’s better to leave some things open-ended so fans are left with a new world ahead of them where just about anything could happen. Bill dying could have opened a whole new world of opportunity for Sookie and her friends. Instead, they made it so everything that Bill wanted, happened. I for one would have found in insanely interesting- since Bill was mostly human there at the end- if Sookie’s glow ball could have banished the sickness and the vampirism. I can’t be the only fan who was disappointed in the producers for this finale, right?

Though I do look upon the end of the series with more than a little disappointment, it in no way detracts from my love of True Blood as a whole. While we’re sad to see these characters go, we just have to remember we can always marathon the series again!

What about you other Truebies? Did you love the finale or were you disappointed like me?