Jenn and Kendyl return with a discussion of The Nutcracker and the Four Realms (2018) and the book and ballet it’s based on.

END_OF_DOCUMENT_TOKEN_TO_BE_REPLACED

Although the official Twilight saga YouTube channel refers to this only as the second teaser, it sure feels like a full on trailer, especially since the last three have been under a minute long and told us very little about the storyline. The newest however, outlines the main plot of the film nicely, for anyone that doesn’t already know (do those people still exist?).

The trailer doesn’t give us a good look at Renesmee, though it does point to her as the catalyst in the conflict. I would think they were trying to make her appearance a surprise if not for the pictures we’ve already seen. It does, however, provide a few more shots of the new characters that assemble to help the Cullens, and hints that we might actually get some action in the film, despite the book’s lack of it.

END_OF_DOCUMENT_TOKEN_TO_BE_REPLACED

I should really be more ashamed at how much I geeked out when I saw these pictures. But, alas, caring is beyond me at this point.

These photos from the June 15th issue of Entertainment Weekly, give us the first look at actress Mackenzie Foy as she takes on the role of Edward and Bella’s unexpected offspring. Most of the pictures of eleven year-old Foy are obviously from a photo shoot, but one that might be of particular interest shows Renesmee and Jacob allegedly having a conversation about imprinting. Awkward. 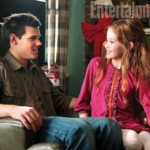 Seeing Renesmee has really ramped up my excitement for the film to be released November 16th. We’ll have to wait and see how her acting skills are, but as far as I’m concerned, she’s got the right look to blend into the Cullen clan and play a character with the power to endear her to the people around her. However, it’s a little worrying that, according to her Twilight Wiki page, they are using a bit of CGI magic to make her look smaller earlier in the film by putting her head on the bodies of actresses Rachel St. Gelais and Eliza Faria.