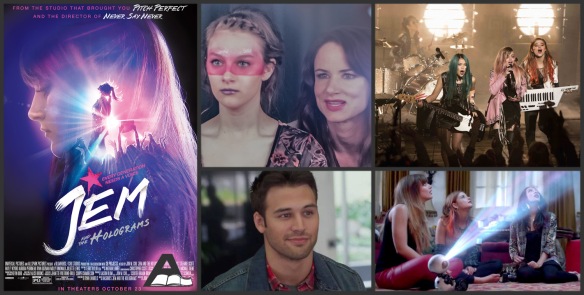 Dorin and Kendyl have a real good time dragging the Jem and the Holograms (2015) movie, talking about how it could have been better and admitting that there were parts they actually liked.

Watch the first five episodes of the TV show along with us in our commentary.

Question(s) of the Week: Would you have rather seen a more straight-forward version of Jem or something that would have been more like the cartoon? What other 80s cartoon would you like to see made into a movie?

END_OF_DOCUMENT_TOKEN_TO_BE_REPLACED

I went to see Minions for my birthday, and I got to see the Jem trailer. I have some severe judgements about it, but before I share them, see the trailer yourself:

Now, I grew up with Jem and the Holograms, and for those who don’t know it, here is a quick synopsis: 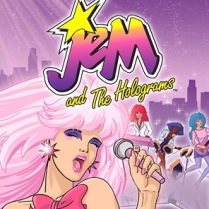 Jerrica Benton and her sister Kimber, have just lost their father and are now “orphaned”—but old enough to be on their own. Jerrica has inherited half of her father’s company, Starlight Records, while the other half has gone to one of her father’s executives, Eric Raymond. He has other ideas for the company, and starts promoting “trash rock” group The Misfits. He also doesn’t want any company profits to go towards, Starlight House, a foster home for girls, which her father set up, and Jerrica and Kimber had grown up with. Starlight House is in need of repairs—and one of their girls, Ba Nee, is in need of surgery for her macular degeneration. Raymond has the idea that he can sweep the company up from under Jerrica and run it all himself, his way. Jerrica doesn’t know what to do until she gets a strange signal and follows it to an abandoned drive-in movie theater. In a hidden passage, she finds a huge machine that her father created with a computer/holographic program called Synergy. Synergy can create holograms so life-like that if it fell into the wrong hands, could be very dangerous, so Jerrica must keep it a secret—so the only ones who know are her, Kimber and their friends Aja and Shana, whom grew up with them at Starlight House. With this new power, Jerrica decides to become Jem—who is a hologram over her to disguise her true identity, and with the help of her sister and friends, they are going to take back the company and save Starlight House, their father’s legacy, and all their girls.

Okay, that wasn’t as quick as I hoped—but I felt that I needed to put it all out there after that trailer, so you can see how OFF it looks. Honestly, I couldn’t stop talking about how appalled and betrayed I felt by the look of this movie for an entire weekend. (After checking YouTube for the trailer, I find that I am not the only one!)

Here is IMDB’s synopsis of the new film:

As a small-town girl catapults from underground video sensation to global superstar, she and her three sisters begin a journey of discovering that some talents are too special to keep hidden.

This left me with a lot of confusion. Which was also propagated by the fact that the trailer I saw, originally, was shorter and did not mention her as Jerrica Benton and her father called her Jem. So I asked myself, is Jem her birth name in this new film? Not to mention that there is a character on the IMDB page named “Young Jerrica Benton”—which confused me even more. Still, even though I am glad that they didn’t screw up that far, there is still a lot to be said about this trailer…and not much of it good.

So when this movie was being promoted, pitched and cast—the guys creating it put it out to all the fans of Jem to post videos on YouTube, either auditioning for the film because they wanted new-up-and-coming people, or to just post videos about their love of Jem. So why does it feel like we are all being given a disservice? 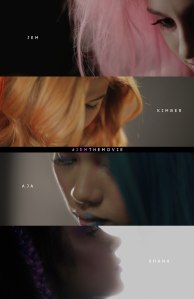 First of all, they pretty much lied about casting “new and unknown actresses”. None of them are—Stefanie Scott (Kimber) was in A.N.T. Farm among other things, Aubrey Peeples (Jem) was on Nashville among other things, and Hayley Kiyoko (Aja) has been in the business since she was 5 years old, and has most recently been seen on CSI: Cyber. It’s not that I don’t like them, but they are not a newbies. The closest we have to an up-and-comer is Aurora Perrineau (Shana) who has only been in a few things, most notably Chasing Life—but her IMDB says “she is an actress, known for A House Is Not a Home (2015), Air Collision (2012)”, so not the newness I was hoping for.

Then there is the problem that, if they were doing this for the fans, they might be failing. I understand that an adaptation has to pick and choose what it keeps, especially when updating it 30 years. Plus the fact that the original was an outrageous cartoon with sometimes wacky storylines, though they did tackle some tough issues—and with SONG no less! However, in my opinion, they are sacrificing the essence of what is JEM. And I feel that if the trailer showed any shred of respect for the original that it is based on, I wouldn’t be so angry.

She is not some Teen Internet Sensation; she is a loving daughter and sister, she cares deeply about family, and that includes what her father built, and the girls that they took in. Jem is a smart and strong female character with business-sense and immense compassion for others—the fame was just bonus, and was not the point.

I do not appreciate or condone the idea that the Internet is the way to make music and become famous. I understand that it is a part of our culture now, but as the Great Dave Grohl said,

“When I think about kids watching a TV show like American Idol or The Voice, then they think, ‘Oh, OK, that’s how you become a musician, you stand in line for eight f—ing hours with 800 people at a convention center and…then you sing your heart out for someone and then they tell you it’s not f—in’ good enough.’ Can you imagine? It’s destroying the next generation of musicians! Musicians should go to a yard sale and buy and old f—ing drum set and get in their garage and just suck. And get their friends to come in and they’ll suck, too. And then they’ll f—ing start playing and they’ll have the best time they’ve ever had in their lives and then all of a sudden they’ll become Nirvana. Because that’s exactly what happened with Nirvana. Just a bunch of guys that had some s—ty old instruments and they got together and started playing some noisy-a$$ s–t, and they became the biggest band in the world. That can happen again! You don’t need a f—ing computer or the internet or The Voice or American Idol.”

That is how I feel too. Now, that isn’t exactly how it worked for Jem and the Holograms, but there was a higher purpose.

Not to mention that the idea that Jem would ever be tempted to go solo is ridiculous. Yes, there might have been storylines about people going solo—Kimber and Stormer, member of the Misfits, felt that they were unappreciated and go off together for an episode, and Shana almost leaves when her fashion designing takes off—but Jem never goes solo. She is the manager of the band and she knows that she could not do it without her friends—it is never about that.

I am just afraid that they are turning a childhood 80’s classic to some cheesy teen melodrama, with a silly robot that plays sad home videos for Jem to cry over.…

SO. MANY. THINGS. WRONG.

I guess I should try to reserve my judgment until I see the actual film (too late, I know) but the trailer hurt me to my soul and I’m not sure I could actually handle seeing the full film. I do not see this turning out as a good adaptation. I am a Jem Girl and I want everyone to love Jem, especially in her original format. I do not want to see my beloved characters put through what happened to Avatar: The Last Airbender.

Do you agree? Disagree? If you think I should still go see the movie, please convince me.