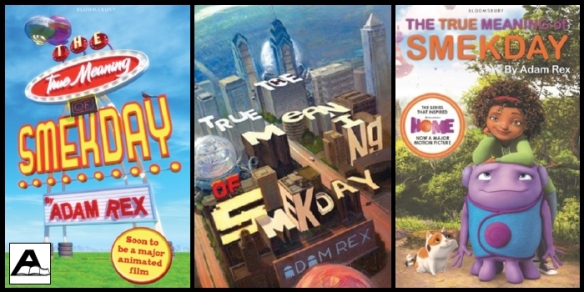 Dorin and Kendyl sit down to talk about Adam Rex’s novel The True Meaning of Smekday. Funny, sweet and surprising, this is another one that we love discussing, especially since we forgot that we didn’t actually live through these events ourselves.

For a similar discussions, check out our episodes on The Boxtrolls, Annie (2014), Big Hero 6, and Alexander and the Terrible, Horrible, No Good Very Bad Day.

-Based on the novel by Nicholas Sparks

The True Meaning of Smekday

Hock Films ‏(@HockFilms on Twitter): “@AdaptationCast @MrAdamRex My 15 y o son has read it cover to cover 10 x. Me not quite so many but >1. We are so afraid about the film.”

Adam Rex ‏(@MrAdamRex on Twitter): “@HockFilms @AdaptationCast Embrace the idea that you will be talking about all the differences between book and film on the car ride home.”

gina fischer ‏(@ginafish54 on Twitter): “@AdaptationCast @MrAdamRex A wonderful book. Funny, clever, and, in many ways, very sweet. One of my top 5 favorite books in the world.

Next episode: ASOIAF: Dance with Dragons by George RR Martin

1 thought on “Adaptation #118: The True Meaning of Gratuity”