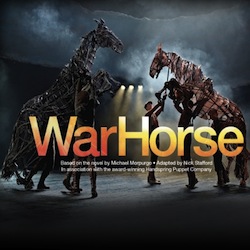 National Theatre Live recently broadcasted encore screenings of War Horse from the New London Theatre in London’s West End. It is based on Michael Morpurgo’s 1982 novel of the same name and was adapted for the stage by Nick Stafford.

The story starts in rural Devon just before WWI, where two rowing brothers, Arthur and Ted Narracott, fight for a horse at auction. Each has a son at their side, one named Billy who immediately wants the horse, and the other named Albert who would rather that his drunken father not spend their mortgage money on the purchase. The drunkard wins and brings the horse home to his family’s dismay. His wife, however, tries to think positively about taking care of the horse so it grows up big and strong, which may enable them to sell him and make their money back. She leaves the responsibility to Albert, who bonds with him and names him Joey. The rest of the story tests the strength of their friendship to overcome obstacles through their separation as well as the hardships of war.

Michael Morpurgo described it best during an interview at intermission, when he said that the story is not only about a boy and his horse, but it is also about the human condition of universal suffering and a story of redemption. It brings forth a rainbow of emotions, from pride to sadness, fear to hope, laughter to tears and back again all while reminding the audience that we are all living, breathing and caring human beings… or in some cases, horses.

The production was directed by Marianne Elliot and Tom Morris, and stars Sion Daniel Young as Albert Narracott, Steve North as his father Ted, Josie Walker as his mother Rose, Alistair Brammer as his cousin Billy, and Tom Hodgkins as his uncle Arthur, amongst a long list of other actors and puppeteers that make up the full cast. Many of the actors played a few different characters which led my friend to ask me during the play “didn’t that guy die already?” though I personally had no trouble following along.

This play on its own is a theatrical masterpiece. From the moment the spotlight drops onto the stage until the finale, there is folk music to guide your way. From seeing the horse, Joey, as a free running foal, to him growing up on the Narracott farm and bonding with Albert, to the boys trying to keep morale up on the front lines, songman Ben Murray fills hearts and ears with his breathtaking and haunting sound, singing live on stage  and enhancing each situation in this enchanting tale.

The acting was way above par and although I am unfamiliar with these actors, I would love to see them again. Each one of them took on their roles as if the stage wasn’t sparse. Even the puppeteers became their characters, breathing and moving like the animals they should be. The background characters were not just stand-ins either, they became part of the little scenery, being fences and gates and moving so the audience knew that the scenes had moved from stable to the field, or down the battlefield and over the barbed wire. Adding to the action and movement of the production, the center of the stage was a turntable giving it a movie feel, further enhanced by the ripped sheet of drawing paper (representing one that Albert rips out of Captain Nicholls’ sketchbook) which had projections of drawings, animated visions of Albert riding Joey, and images of war on it.

The puppets alone are a great reason to see this stage production, made by the Handspring Puppet Company of South Africa. These life-size and life-like puppets were characters of their own and although you could easily see the puppeteers, especially when Joey was a foal, it did not distract from the animals themselves. In fact, it is nice to see the puppeteers credited as the horse’s head, hind and heart. One of my favorite characters was actually the feisty goose played by puppeteer Tom Meredith.

Throughout the play, it amazed me what they could do with the puppets. Characters mounted the horses like a real ones (which is amazing in itself) and as they galloped and jumped the puppeteers could feign slow motion which was not only an amazing sight to see but added to the already building tension of warfare and a failing cavalry in a war that had advanced past their means. Besides that, when *Spoiler Alert: highlight to see text* Topthorn dies, not only is it gut wrenching, but the puppeteers come out from under him once he is down and walk away, letting people know for certain that the horse has died.

Joey and Topthorn moved and nearly breathed like real horses would. A glint in the eye, a flick or perk of the ear and a swish of the tail could tell you exactly what the horses were thinking. Which is great because although the play is staged so you can get everyone’s perspective, Michael Morpurgo’s novel was written in the first person perspective of the horse. During the aforementioned interview, they also spoke with Marianne Elliot who mentioned that they changed it because they “didn’t think a talking horse would work.” I agree that was a good choice.

This production has become a smash hit all over the world, with productions now being put up not only in England and America, but also Germany and China. It is a story that resonates with everyone, and I am not surprised. I was, however, surprised to learn that when Michael Morpurgo’s book was first published, it was not an immediate best seller. He said that if it wasn’t for the diligence of his publishers it might have fallen into obscurity. “There is also another similar book that no one has ever read called Black Beauty” he says, which may have attributed to that.

He was a bit concerned about the stage adaptation because when he read it, as it was clearly different from what he wrote, but he says that it was also because he was unfamiliar with the craft of playmaking, so to him a lot of things didn’t seem to work, but when you “put it in an actor’s voice and the actor doing what the actor does” it becomes terrific and it really works.

The whole production was seamless and although you could see how much work went into the design, staging, and music, the flow of it made everything seem so easy. It is more than worth the watch, so luckily it is available on DVD. For more information on the cast, crew and behind the scenes action go to NationalTheatrelive.org.uk.

I have yet to read the book myself or see the film version, but seeing this has made me want to scope them out and get a full view of the story in all its forms. I will post my thoughts on those once I do.

Has the stage adaptation created any other book readers? Let us know what you think in the comments!