It took my small town theater a week to get The DUFF, based on the book by Kody Keplinger, after its release date and the waiting built up my anticipation even more than normal. I got to the movie theater with my bestie, we got comfortable in the weird 60s chairs that don’t allow a person to sit up quite right and waited for the movie to begin. Finally the lights flickered out and I am SO excited to see the how they took a book I loved and portrayed it on film.

Of course, Hollywood totally screwed it up… 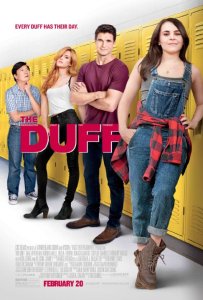 By the end of the movie I had turned to my friend more than a dozen times saying, “This is not a thing!” or “That NEVER happened!” and my all-time favorite, “Why the hell did they decide to do that?!” Needless to say, I was more than a little disappointed to walk in and see that not only had they changed the significance of certain characters, they had completely made up story lines about others!

Let me start off with Bianca, the main character in this film who is played by Mae Whitman. I love Mae Whitman; she is a great actress no matter what the medium. Her portrayal of Bianca is probably very good for what the scriptwriters gave her. However, the actual character they wrote was so two dimensional I was missing all the actual character. Bianca was supposed to be independent, stubborn, unique, smart and mildly damaged. She had so much depth and feeling and you could really sense that from the book. The character in the movie, while entertaining at times, was superficial and mainstream.

Wesley, played by Robbie Amell, was actually pretty much what I expected; a cocky jock that can have any girl, but is still pretty charming with more layers than one might initially think. But his Yoda persona to Bianca was a complete and utter creative addition by the writers and directors. Why they thought they needed to build in that kind of relationship with Bianca to get girls to like him is beyond me. I much preferred the way that they fell for each other in the book. Slowly, by actually talking, sharing bits and pieces of themselves and being completely vulnerable. A funny montage of Bianca trying on horrible outfits did nothing for me as far as their relationship went.

Now, let’s talk about how Hollywood once again made Dad the bad guy. In the book, Bianca lives with her father while her mother is absent most of the time. They got her career right, just not how she came about it. She was simply unhappy after her parents died and her husband encouraged her to find an outlet. What she found was an outlet from her family. This left her husband broken and Bianca trying to pick up the pieces, her only comfort her growing pseudo-relationship with Wesley. I still don’t understand the reason for the switch. Maybe to make it more appealing to teenage girls who tend to relate better to their mothers? But I would have like to have seen how the world actually reacted to a woman leaving her family by choice.

Another character that was completely changed by the powers-that-be is Toby. They took him from an adorable geek to a cheesy musician with an awful voice. What was wrong with a geeky Toby? It was more in the theme of Bianca’s character that her crush would be an academic with little to no care as to what other people thought. It made Bianca feel more shallow by having her crush on a musician that she had never even spoken to. To top it all off, they made him an awful “DUFF” user. When in reality, they actually mildly hit it off in the book for a while.

Madison on the other hand was sort of a non-character in the book. She was mostly just a chick that Wesley had slept with a few times. Apparently every teenage girl has a beautiful girl that causes her hell in high school. I will admit that it was an interesting take on the mean girl though. Very modern and brought a massive controversial issue that has been making the headlines of late: Cyber bullying. In a technologically driven age the capacity for “anonymous” bullying online has run rampant. I was glad they brought that issue into the movie.

I could go on and on about the many things that were changed, but that would make for an extremely long post and I am getting way too long winded as it is. Despite all the above complaints, I did think that, overall, the movie was very good. I laughed my butt off along with the rest of the people in my theater. I wish that they had stayed closer to the book storyline, but they did keep at least one of the major messages.

Everyone has insecurities. Everyone struggles with liking who they are. We just have to learn to accept and love ourselves for the individual weirdoes that we all are.