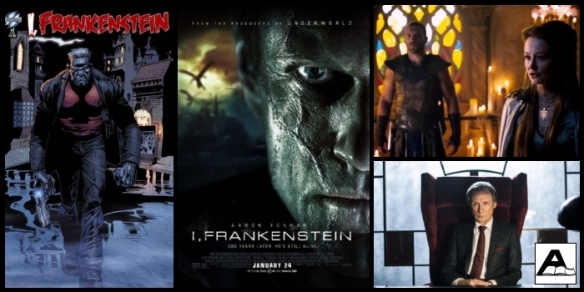 This week the gang discusses the comic I, Frankenstein: Genesis by Kevin Grevioux as well as the motion comic and the film adaptation starring Aaron Eckhart. While they applaud the trans-media attempt, they aren’t sure that the film stands up well on it’s own.

What do you think? Have a listen and then tell us your own thoughts on the comic and film in the comments!

For similar adaptations, check out our episodes on Frankenstein/Frankenweenie, Thor: The Dark World, RIPD, Carrie, Kick-Ass 2, and The Wolverine.

Music: Over at the Frankenstein Place by Alkaline Trio from The Rocky Horror Punk Rock Show

-Based on Sexual Perversity in Chicago, a play by David Marmet

-Based on Mark Helprin’s novel

-Based on the book series by Richelle Mead

Next episode: #76 on series 3 of the BBC’s Sherlock

Previous episode: #74 on The Midas Box by GP Taylor and the film The Adventurer: The Curse of the Midas Box