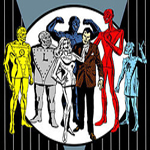 Over the past month there’s been a lot of buzz circling Warner Bros. and DC Comics, and their upcoming plans to turn several DC properties into films. One of those projects was rumored to be directed by Men in Black III’s Barry Sonnenfeld — an adaptation of the comic The Metal Men.

Unless you are a DC comic fanatic or aficionado, you might not be very aware of The Metal Men  – though, they did briefly made a cameo in comic-book form on Mad Men.

The premise, however, is one that seems very familiar and easily adaptable for today’s audiences. I even thought I might have seen a bit when I was a kid, but I couldn’t put my finger on if I actually had.

Essentially the story follows a group of artificially intelligent robots created by a scientist, Doctor Magnus, with each one taking on a different chemical element. There’s Gold, Lead, Mercury, Tin and Platinum, and they all have personalities relative to their element as well as having a power similar to it.

Even though The Metal Men have stayed pretty obscure over the years, they have had a few reboots.

After their first appearance in their own comics in the 1960s and 1970s, they got a bit of a change in the 1990s version where the Metal Men are human personalities and intellects that are transferred into blank robots via a lab accident instead of being artificial intelligence. Doctor Magnus is still the creator, but his family, co-workers and apparently a pizza-delivery man named Jack – are the personalities.

In the 2000s they reappeared in the Infinite Crisis series as well as the Superman/Batman series where they gain another female character, the sarcastic Copper, and also fall under Brainiac’s control for a short time. Also, there was a storyline where Doctor Magnus’s brother tries to avert a catastrophic future event by turning the Metal Men into evil, radioactive versions of themselves called the Death Metal Men.

Check out the Metal Men with Batman in Batman: The Brave and the Bold.

Over the years the Metal Men have been seen fighting alongside Batman, Superman and the Justice League. Not to say that we will ever see the Metal Men in a Justice League film, but if they become a success, who knows, right? –As long as those darn Wonder Twins don’t show up!

It is hard to say, at this moment, what way they will go with this amazingly undiscovered team, but as Warner Bros had said originally when rumors circled that they were working on “an adaptation of a “secret ’60s comic book”. We can assume they may stay true to the original story – but when it comes to Hollywood, who knows. Still, I like all the versions of The Metal Men to be excited for the film. It really could be a monster franchise for Warners if they get it right.

Do you think this will be the next big series franchise?