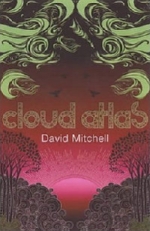 Cloud Atlas by David Mitchell, published in 2004, won the Literary Fiction Award at the British Book Awards and the Richard & Judy Book of the Year Award. It tells six interconnected stories that range from the 1850s on a Pacific Ocean voyage to current day Britain to  futuristic, post-apocalyptic Hawaii. Each story is nested into the next through an observer or reader and left unresolved until the end.

The film started production in September 2011 and has been set to come out in October but without a specific release date. Earlier this week it was finally announced that the film would open on the 26th.

I’ve never actually read this book, but the description really makes me want to and the format makes me think that it will translate really well to film. What do you think?

Leave your thoughts in the comments!