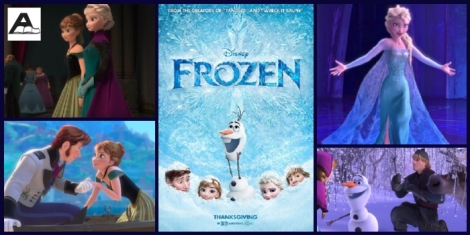 The hosts think that even ‘loosely adapted’ is being a little too generous with Frozen, Disney’s version of Hans Christian Andersen’s The Snow Queen. But they are able to find a few elements of similarity as well as a multitude of reasons to love the film, including the sister-driven plot, the love story red herring and of course, the reindeer duet.

For similar adaptations, check out our episodes on Epic, Once Upon a Time, Snow White, Emma and The Lizzie Bennet Diaries.

Opening Music: Frozen Heart by The Cast of Frozen

Closing Music: Love is an Open Door by Kristen Bell and Santino Fontana

both from the Frozen soundtrack

The Hobbit: The Desolation of Smaug

-Based on the novel by JRR Tolkien, covered on episode #26: Luckily for Hobbits, Size Doesn’t Matter

-Sequel to An Unexpected Journey, covered on episode #29: Toners for Dwarves

-Based on the non-fiction novel by Robert M. Edsel

Next episode: #71 on Team Starkid’s Twisted: An Untold Story of a Royal Vizier

One response to “Adaptation #70: What Frozen Things Do In Summer”