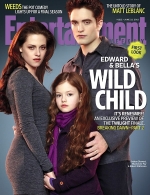 I should really be more ashamed at how much I geeked out when I saw these pictures. But, alas, caring is beyond me at this point.

These photos from the June 15th issue of Entertainment Weekly, give us the first look at actress Mackenzie Foy as she takes on the role of Edward and Bella’s unexpected offspring. Most of the pictures of eleven year-old Foy are obviously from a photo shoot, but one that might be of particular interest shows Renesmee and Jacob allegedly having a conversation about imprinting. Awkward.

Seeing Renesmee has really ramped up my excitement for the film to be released November 16th. We’ll have to wait and see how her acting skills are, but as far as I’m concerned, she’s got the right look to blend into the Cullen clan and play a character with the power to endear her to the people around her. However, it’s a little worrying that, according to her Twilight Wiki page, they are using a bit of CGI magic to make her look smaller earlier in the film by putting her head on the bodies of actresses Rachel St. Gelais and Eliza Faria.

Also included in the issue are photos of the Denali clan and Senna and Zafrina from the Amazon coven, seemingly from the scene when they first see Renesmee. I particularly enjoyed this first look at the Amazon vamps as they stare in awe of little Renesmee. Zafrina especially looks really amazing and I can’t wait to see how she’s portrayed as a character.

Last but not even close to least in my mind, is a picture that confirms there will be a scene where Emmett and Bella arm wrestle. It’s those little fan favorite inclusions that help me forget all the Twilight hate for a moment.

Click here to see all the photos in full.

Which ones are you most excited about? Leave your answers in the comments!